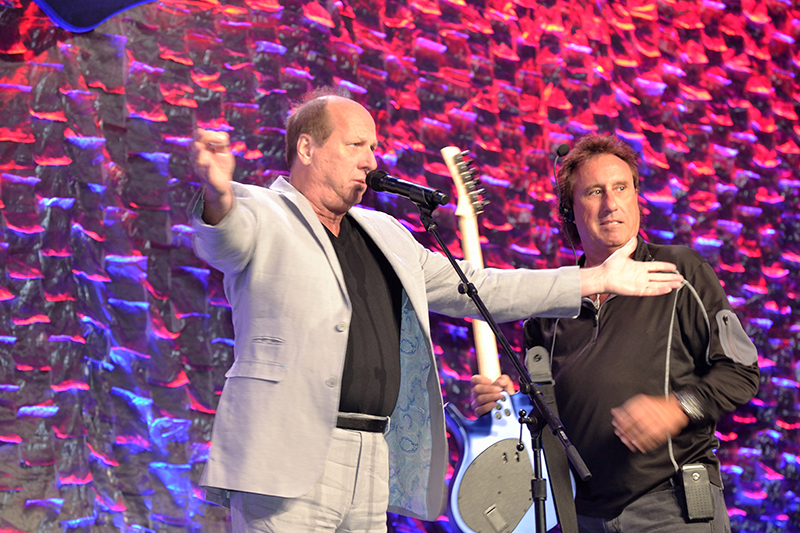 Stage manager Jeff Van Duyn came out to tell host Adrian Belew that the event was not, in fact, the Rock and Roll Hall of Fame induction ceremony.

Adrian Belew, Tom Petty, Richard Fernandez, Danny O’Bryen and Greg Mackie were among the impressive list of luminaries at the 2016 Parnelli Awards. This year’s honorees, award winners, and guests celebrated at the largest Parnelli Awards ever produced during the annual bash held on Oct. 22, 2016 at the Rio Hotel and Casino in Las Vegas. The much anticipated evening is not only about honoring our peers but it really is a testament to the collaborative and supportive nature of our industry as the Parnelli’s list of production partners makes clear. Access Event Solutions, Atomic, OSA, PRG, SGA Production Services, Stage Crew, and TPI Technical Productions Inc. all contributed to the successful production.

“Every year we are truly humbled by the support,” notes PLSN/FOH/Stage Directions publisher and Parnelli Awards executive producer Terry Lowe. “It’s thanks to our incredible sponsors and our valued production partners that we can celebrate the amazing and inspiring careers of our three lifetime honorees, all of them legends of the live event industry, at an event of this scale. It’s also great to have the opportunity to give some richly deserved recognition to many of the top achievers and innovators who are continuing to advance the live event industry’s state of the art in such a worthy setting.”

The Who’s Who of companies and production talent that lend a hand are also greatly appreciated by Kevin Mitchell, producer/writer of the Parnelli Awards. “It has been really exciting over the last couple of years as we have been able to up the quality of the production thanks to our partners really coming forward in a big way,” states Mitchell. “The show just keeps getting bigger and better every year and, of course, that means it gets more complicated,” Mitchell adds. “It’s thanks to our production partners that we’ve gotten so much bigger and become a really professional event. Ten years ago, I would’ve never dreamed I’d be sitting where I am in terms of the quality of the vendors who partner with us, who donate the gear, their teams, their time and their services to us. They don’t have to do this yet they do it and the best part is they really want to do it; they want to be part of honoring the work done in the industry.

“All our partners take the show very seriously,” Mitchell continues. “The professional quality of what they do for the Parnelli’s is amazing. They’ve really made it possible for us to bring the show up to a higher level. In fact, they have upped the game so much that whereas in the early years of the show my challenge was to just find production partners to get some gear; today my challenge is making sure all our production partners get all the support they need from us.”

One of the ways Mitchell has kept his sanity and organization as the Parnelli’s production values have grown is working closely with TPI Technical Productions, Inc. “Michael O’Keefe, [founder of TPI and also a Parnelli Advisory Board member] came to the show six years ago and said, ‘Hey, this is great. But can we help make it better?’ We quickly said ‘Yes,’ and the TPI team is amazing. TPI really are on top of the production elements with a team of five people. We are fortunate to be able to have Elizabeth O’Keefe, who is a Parnelli Award-winning designer, offer her advice and ideas; Gene Brian is the engineer, everything goes through him and he’s remarkable. LePaul Williams does all the audio cues with me. Trent Joyce directed and called the show. Also this year TPI’s Jack Rushen stepped into the role of Production Manager as our long time production manager Kent Black retired, though he is still a valued member of our advisory board.”

Rushen, director of production operations for TPI, had not even attended a Parnelli Awards previously, so he dove in as production manager much as he would any new TPI client. “This is what we do at TPI, we are a one-stop production group,” comments Rushen. “Call us, tell us what you need, and it’s going to get done. We work as a whole team with a whole production office of resources. On the Parnelli’s it’s a very different event, in as much as the gear is donated and our production partners really do a lot of the actual work. That’s the great thing about the Parnelli Awards, you get to work with such great companies. Having them on board made everything easier. They all put their best foot forward and really gave us everything we needed. My role was really to keep everybody together sharing drawings and the schedule, including with the venue, keep communication flowing, and making sure all the show’s production needs were being met.”

Also newer to the Parnelli team was designer Jon Murphy of Lights On Tour, who was returning for a second year to handle the lighting and scenery. For him, time and the actual audience are key considerations as he starts to work. “Obviously, I want to bring my best to the table. It’s kind of amazing for me to be doing lights for the Parnelli’s because the audience is some of the top lighting designers out there. It can be a little intimidating because I know that for most of those cats at the event, they’ve done the biggest, baddest shows out there. They’ve seen it all, done it all, and really are the best in the industry. That’s why they’re at the Parnelli Awards.”

For Murphy it’s about having a clean rig that lets him not only light the stage but create an environment. “Since the Parnelli’s is an awards show it’s not about flash and trash,” explains Murphy. “It’s more about creating an immersive atmosphere for the audience. I always look at the room as a blank canvas and I want to extend the lighting on the set out around the audience, giving them the sense of being part of the show. I also have to be aware of load-in and programming time by keeping fixture counts low since we only have one day and four guys to be show ready. So I need to have a purpose for every fixture in the rig and cover as much surface area as possible. Creating a powerful rig with just 20 lights; taking the smallest, simplest rig and getting the most out of it is what I take my pride in when designing the Parnelli’s.”

The set exemplifies the Parnelli experience, according to Murphy. “It’s really a collaboration between me and Atomic. I get the privilege to work with Atomic and their crew. We start by throwing some ideas around and then their in-house graphic designer puts together the renderings that we can all work off of throughout the team. And the Parnelli Awards is absolutely a team effort. We really do collaborate between all departments to make sure that everyone is getting what they need in the design of the set and the rig so that audio, projection, and lighting come together. Which is great because I get to work with all the companies, Atomic, PRG, who do a great job supporting the lighting and video, and OSA for the audio; they’re also always a pleasure to work with. And I have to say that Jack did a great job with wrangling all the different departments and pulling all the details together. It’s an honor to be able to design for my peers and work with the Parnelli team.”

PRG’s Bill Daner takes the lead on getting the video needs supplied for the event. “Our goal has always been to give them the best gear we could and keep upgrading as the show grew over the years,” describes Daner. “We started at standard-def and now it is all Grass Valley LDX high definition cameras with Fujinon and Canon zoom lenses. It’s all projection on this show, no LED panels, so we use three Barco projectors covering the two side delays and the center stage hero screen. It is important to us, and me, that we give them our best, because it’s an important event. This is an interesting show since what I do is corporate industrials and special events, which the Parnelli Awards essentially are, but I don’t do any concert touring. So on this show I get to see that part of the industry. It’s always a pleasure to get to see the pride everyone takes in our industry and to learn about how so much came to be, how rigging came into play, and some of the sound innovators, the tour managers, and the LD’s. You get a snapshot of their world but also of our industry as a whole. We all do the same thing. We load-in the show and load-out the show and in between we all try to make sure the client and/or artist is happy.”

In this case the client is in a sense the industry itself and perhaps the best evidence of that client’s satisfaction is that fact that the Parnelli Awards have grown into one of the most prestigious events in the industry that annually sells out. Mitchell sums it up with a sentiment shared by everyone on the production team. “I love being even a small part of the joy of somebody in our industry being honored. None of our winners or honorees do their work for the accolades, everyone works in the background but when you learn about their work you know that they deserve this night for what they do for our industry. It’s important that the history, the talent, the people and the companies of our industry are known. The Parnelli’s shine that light backstage on those people and the awards have grown to be a valued recognition of the work. I love it when I go to a company’s website or a designer’s page and they are bragging about winning a Parnelli Award. It’s respected in the industry, and we are all proud to be part of that.”

Greg Mackie A Life in the Mix