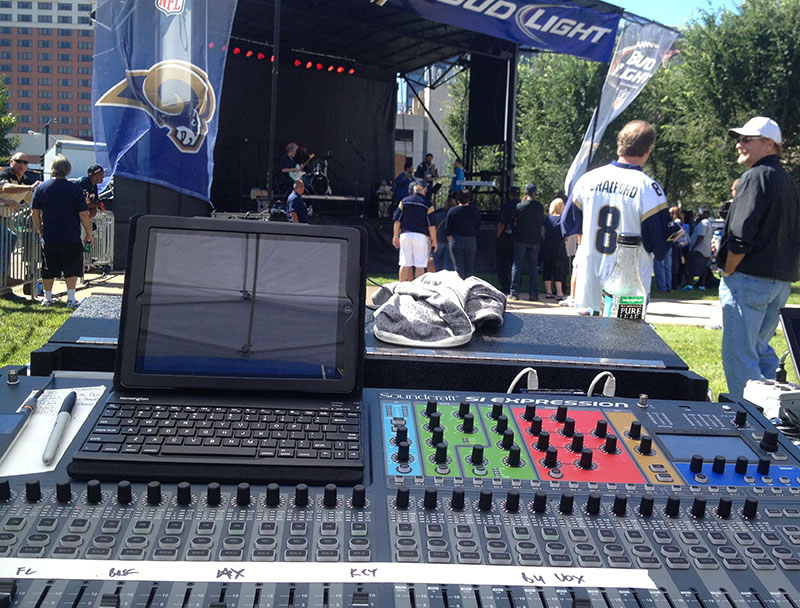 Having delivered audio services for all pre-game NFL events for the St. Louis Rams for the last two years, as well as other productions for over a decade, Technical Productions Inc. (TPI) again provided the audio system for the festivities prior to the team’s first game for the third season. While maintaining a low budget just outside the Edward Jones Dome in St. Louis, engineers Stephen Jones and Marshall Stacy of TPI took advantage of the Harman Soundcraft Si Expression 3 console’s mixing power and BSS Audio signal processors to achieve the most compelling sound for the audience.

As is typical for the Rams’ live pregame events, TPI supplies a 20x26-foot stage to complement the space. Featured in this particular event were a Si Expression 3 console with two 32x12 stage boxes and three Dante cards, plus five BSS Audio FCS-960 graphic EQ units and four BSS Audio FDS-366T loudspeaker management processor, of which two were used for the main PA’s and two for the monitors.

“We’re trying to get the highest-quality sound for the best price,” said Stephen Jones of TPI. “Because we have to maintain a low budget, we are always trying to keep up with modern technology. That’s why we switched to the Si Expression lately, because it’s affordable and allows us to add more loudspeakers to the mix. Also, with the ViSi Remote iPad functionality, I can be at front of house while the monitor tech is onstage when syncing up all our equipment; it’s just easy.”

Despite the Si Expression’s affordability, Jones is confident it can stand up to other, more expensive brands. “The EQ on the Si Expression sounds very nice compared to our previous boards,” he said. “I also like the fact that I can make every mix stereo or mono, because I use a lot of parallel compression in my mixing. I like to break up the instruments and vocals into different subgroups and compress them individually.”

Having the Si Expression allowed Jones, who is very detail-oriented, to maximize his abilities during a show, and with the onboard memory, no intricate setting is left unsaved. When combined with technologies from BSS Audio, Jones has everything he needs without going over the budget.

“I like the immediate response from the BSS Audio technologies inside the console, which are very sensitive, so that whenever I make a move I can hear it instantly,” said Jones. “Overall, it’s a really great-sounding system.”